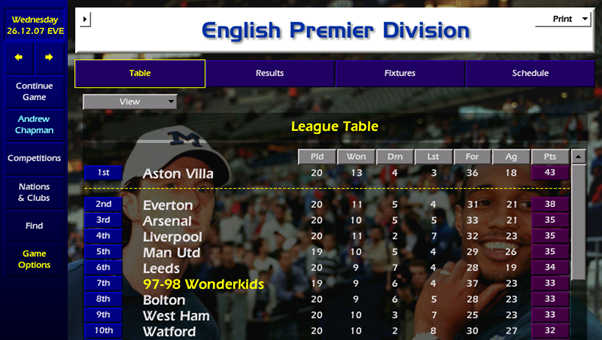 Last time out we’d started to recover from our awful start. We’re still 10 points adrift however so we need to keep the pace going to avoid getting the chop.  You can catch up here.

Well…if this is a pre-curser to the League Cup then geeet up.

We were better with 10-men when Madsen moved into midfield. Delfim gets a 3-game ban. Well done you idiot.

How do you follow up an excellent 4-1 win? With a pathetic whimpering 4-1 defeat at home.

More players lost to injury. Things can only get better, surely?

At last, some positive news.

In the World Club Cup, instead of curing their headache, Orlando Pirates striker gives Stuttgart one.

The FA Cup, always kind to the holders. Shola banged 33 in last season; he’ll get snapped up this summer.

It’s a quick re-run vs. Chelsea and Donny Osmund’s son helps us on our way. Jensen’s off pens now he missed too many.

That’s all good and well Davey mate, but he’s a complete liability.

Speaking of liabilities, Weaves conceded 2 in the first 5 minutes. It costs us the game. Christophe gets a 10 for tying his shoelaces with his mouth whilst his boots were on fire.

Beto picks up a ban and as I consider giving Inzaghi a start he gets injured. Grand plans. Diabolical. The board are fuming. It really looks out of reach.

Everyone is sticking the knife in.

We draw an old nemesis in the FA Cup. If we win, we’ll do a tiny dance.

Back in the league we leave the Man Utd board wondering if they were right to keep the faith.

And you. Stick yer toffee where the sun doesn’t shine.

The gap is 6 points, but they have 2 games in hand.

In the Champions League that age old forward duo of Trevor Benjamin and Ronaldo have a quiet day under the watchful eyes of Litos and Beto.

Balling with a 90th minute winner that has me doing a tiny dance on the ceiling. Get in son. Potential stumbling block…

If I’m not going to win the league, I need to win everything else to keep the board happy. The CL double header is less amazing. But away from home I’ll take that, #drivingseat.

The boys are happier now we’re in 3rd place. It seems to have settled down. Except for the selfish prick Jensen.

And there you have it; the league might as well be Villa’s with 11 games to go.

We’re really struggling defensively but we’ve got no options. Deco has come into the midfield and is doing a nice job of helping us tick over. But Litos and Beto are getting ropey and I’m not sure there’s any better left out there in terms of CM97-98 minus men. We’re clinging on, can we hang in there?

One thought on “CM00-01: The Return of the Wonderkids P32 – Minding Brian’s Little Gap”

Good day and happy weekend! The journey reaches the end today as the 2022 CM Cup reaches a conclusion. Firstly we’ll have the 3rd place playoff and then it’s the main event: The final between Croatia and Argentina.

Well hello there. If you’re still with us, thank you and I hope you’re invested in the outcome of the world’s great cup competition based on a management simulator for 1997. Your 2022 CM Cup semi final line up:

Well hello there. 32 started, 8 remain. One of these 8 managers will lift the 2022 CM Cup. The reigning champion is joined by two former winners, three debutants and two veterans. It’s the business end alright, but who will … Continue reading →

Hello and good day to you. Yesterday we got our first four quarter finalists but such is the way these draws work, we now need to find four more. Here are the 8 hopefuls in the bottom half of the … Continue reading →

Good day to you. We’ve got 8 last 16 ties for you, split across today and tomorrow. Today we’re dealing with these 4 at the top of the draw: They’re all pretty interesting ties with plenty competitiveness in each. Can … Continue reading →