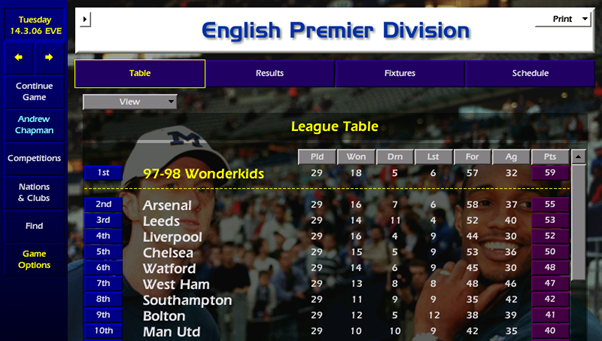 We’re having quite possibly our toughest season yet. Combining European competition with the board’s domestic expectation and the pool of players I trust getting smaller each season is proving tough going. You can catch up with last week here.

Our first piece of news in this update is that we’ll be revisiting our Champions’ League group foes Valencia.

All the while Alex Ferguson is playing mind games. You’d think for a team in 10th place and out of the running he’d leave it well alone. The old f***.

We’ve been off the boil but we get a win we didn’t deserve at 3rd placed Leeds.

Bak-Jensen recalled covering for Balling with a double. Domi strains his wrist writing his 1000th transfer request of the season.

One legend gets the chance to decide his time. It’s a shame but he just hasn’t been able to break back into the side for 3 seasons.

We just cannot muster a goal at 14th Wimbledon. Depressing.

Domi plays a ‘5’ but surprisingly takes it on the chin. You can be all pally, still no transfer mate.

We welcome Valencia back to the slicer. They have a ridiculously good squad. It shows. We give ourselves a mountain to climb.

The season isn’t over, but as ever the awards are already in:

Our high-octane performances continue at Bolton. An entertaining but infuriating 90th minute gets me riled.

As ever, we laugh off the invite for the Toto Schillaci Cup.

Weaves is finally being acknowledged. He’s among good company in that group of ‘keepers.

We sneak a win at Portsmouth and its squeaky bum time.

Our run in sees us face all teams in the top 10.

I think I might need a drink. What a Champions League Quarter final. We look like we’re heading out on away goals…twice. And then boom.

Ricken will miss the run-in with a 3-week layoff. The draw is an absolute schnide. That said, Leverkusen spanked us 5-3 in pre-season, so I’ll take it.

Weaves gets his 1st cap in a 1-1 with Holland. We’re struggling in the league.

Games in hand ‘should’ see us through but this is not a fine vintage. In the Champions League however, we just seem to find what we need.

Madness that Arsenal dominate once they were down to 10 men.

Barry Combe’s twin brother on the bench was an added bonus. Still need to win our games in hand to be sure.

In the Champions League, well, what a f****** game. We were in cruise control until some moron got themselves sent off. Luckily we didn’t concede another at the death.

The draw for the final will see us face up to Kennedy.

We can win the league with our catch-up game. Against Man Utd.

Jensen out for 3 weeks, Balling out for 3 months. Champions League final looking like a death sentence. Another eventful game at United sees us grab the title on Fergie’s patch.

Hust will be unfit for the final, hopefully we can play him injured. F***. (Apologies for the swearing but this has been a pain in the arse of an update!)

We put out a weakened team at 4th placed Liverpool…and still manage to win.

Port Vale 11th. Didn’t see that coming. To bring the season to a close, it’s the Champions League final. Our tired players, missing Balling who has 11 goals in 10 CL games and Daniel Jensen…I’m not hopeful.

It would be that man wouldn’t it. Even with 10-men they absolutely rattled us all game long. We had chances in the dying minutes but couldn’t put them to bed. Missed opportunity. Perhaps, we just aren’t good enough.

The ratings were fairly woeful. I’m not sure we’ll challenge next season. I might need to try and recruit some more 97-98 Wonderkids if any are still going. Quite the turnaround from the Bak-Man.

But player of the season?

I finally get my own glory too.

And with that, I bid you goodbye for now. The World Cup is underway but, as it finishes as the new season starts in game, you’ll have to wait and see how our boys get on internationally.

It’s Monday which means we get another season of Matt’s AFC United. Can they get some of their titles back? Hello, and welcome back to your weekly installment of seasonal action from Hall and The Gang. Last time out we rattled through season 12 and picked up the weakest of trebles – the Charity Shield, […]

Here we are again, back at the Retirement Academy trying to recover from a bad start. It’s different this time, we are the defending champions and have a chance of making the last 8 of the Champions League. Life is good. But it could be better.

A Game of Luck: Is the Game Engine Against You? | @KingOfTheRooks

Philip is having a well deserved week off so we’ve let Andrew loose for this one off special…is the game against you? You’re probably wondering what on earth this is all about, well…last year we ran a test on ability vs. stats (you can re-read it here) and that’s all well and good but…what impact […]

Hola! and welcome to Bilbao, home of the Guggenheim museum, and the Basque Boys, who can hopefully entertain you with some artistic football this week. How will we fair this week as we pass the halfway point of the league season and reach the nitty-gritty stages of the cups?…

If you don’t know Deano by now, you will never, never, never know me…wait hang on, that was Simply Red, not Deano. Here’s the main man from Costa del Dons: Recap of Rules & Objectives Vinny Jones captain. Only players with Aggression 18+ allowed Hurt the opposition; fan prizes for sending offs, opposition injuries and […]